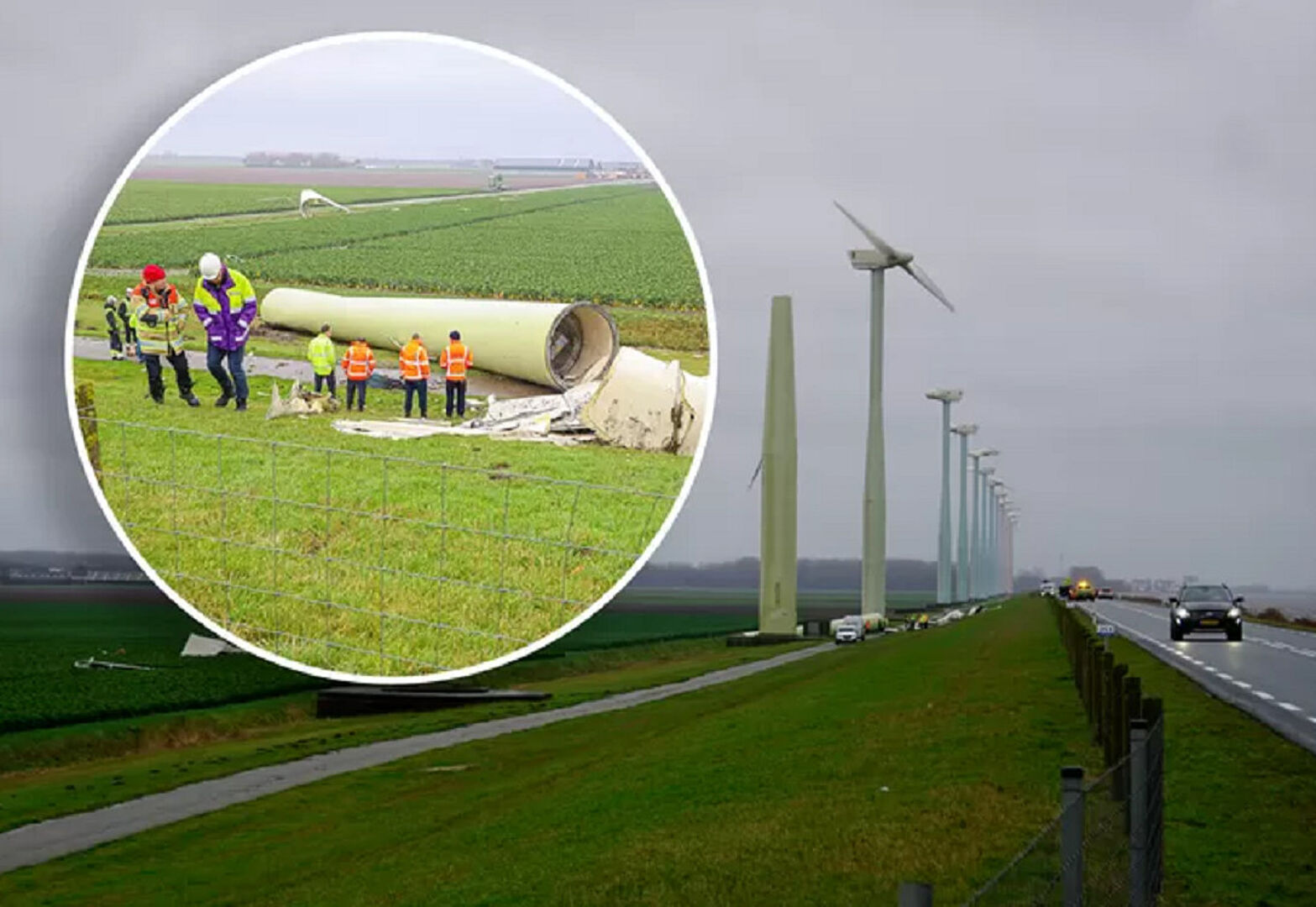 On January 4, 2023 part of a 25-year-old wind turbine collapsed on the Eemmeer dike at Zeewolde (The Netherlands). Judging by the debris, the fall must have ended with a loud bang. The dike was abandoned which meant that thankfully no one was injured apart from the material damage. They are now investigating how this could have happened and how it could have been prevented. (Photo: © AS Media/PMN)

Several experts are already calling for better supervision of the safety of older windmills/turbines. According to Gerard van Bussel, emeritus professor of wind energy, wind turbines should be subject to an external 'periodic inspection'. Wind farm owners and operators themselves are now responsible for an annual safety check. There is no independent (government) agency that supervises this. "It's a bit like the butcher inspecting his own meat."

Van Bussel pleads for an annual inspection of wind turbines, carried out by an independent body. Especially for turbines older than twenty years, because they are more susceptible to defects.

Van Bussel made the same call eight years ago, after the rotor blades of several old windmills had broken off in various places. But after this no independent inspections were made. The professor hopes that the event in Zeewolde will change that.

Wico Ankersmit of Dutchwind thinks that change is imminent. ”The fall of this mast will probably have an effect on the whole Dutch windmill world. There may be rules about stricter inspections, or about a maximization how long such a wind turbine can be used. I don't think the government can sit still after an event like this."

How are such huge structures inspected?

Wind turbines are usually significant high, therefore it usually isn’t desirable to use scaffolding or cherry pickers. Furthermore, the structure is coated to protect it against corrosion, which makes visual inspection of the welds impossible. In these regards, such a structures is similar to bridges, amusement park attractions, cranes and offshore rigs.

MME Group from Ridderkerk (The Netherlands) operates under the slogan “A Longer Life” and has decades of experience in carrying out weld inspections on such objects, both onshore and offshore. Therefore, MME Group is the right partner for both owners and operators of wind turbines and research and engineering firms that are contracted to assess their structural safety.

Inspections at height without need for coating removal

MME Group has a large in-house team of 175 Non-Destructive Testing technicians that are certified according to ISO 9712 and IRATA standards to inspect this kind of steel structures at height and in difficult to reach areas using Rope Access techniques. For inspection of welds underneath the coating so called Eddy Current Testing (ET) is used. This form of non-destructive testing makes it possible to detect cracks for example caused by overloading or vibrations, without the need for coating removal.

Other inspection activities on wind turbines MME Group focuses on include inspection of the rotor blades, paint inspection, visual inspection and ultrasonic testing.

By contracting MME Group for periodic NDT inspections during the operational life span of wind farms, owners and operators gain insight in the exact condition of the installation. This not only allows them to determine whether further action is required, but also shows to society at large that they take the safety of their wind turbine(s) seriously.