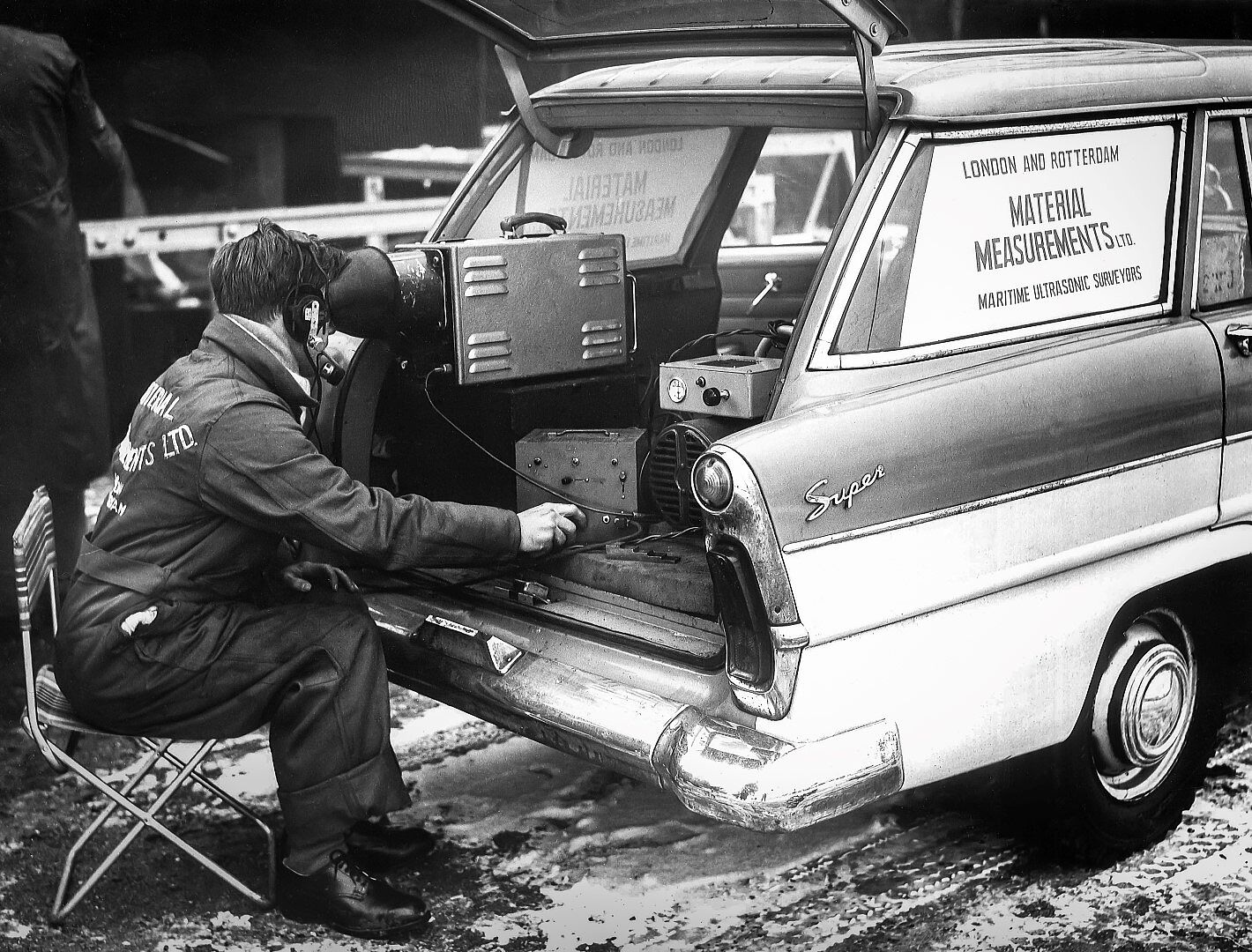 Back in the day, before the 1960s, special surveys of ships required drilling holes in a ship’s hull to determine steel thickness. Obviously, this was an inefficient and costly practice. After emigrating from the United Kingdom, Cedric Talbot started the company Materiaal Metingen NV in The Netherlands in 1963. He was one of the first pioneers who saw the potential of using ultrasonic technology to carry out marine inspections. The first models of this Non-Destructive Testing equipment were heavy and bulky. However, not having to drill holes was well worth the effort and the new technology found quick adoption throughout the marine industry.

After a few years, Cedric expanded the companies’ scope into corrosion prevention for ships, offshore structures and industrial installations by partnering with the UK based company Wilson Walton Ltd. The business received a considerable boost when it was contracted by the Dutch oil company Shell to survey their tanker fleet. With such references, Materiaal Metingen soon became a trusted partner for oil majors such as Exxon, Total, Aramco, Chevron and Texaco.

Making use of its worldwide network among shipping companies, the company started selling high quality Harbinger aluminium boarding equipment. From the 1980s, the company further broadened its field of activity, offering a growing range of Non-Destructive Testing services across all branches of industry from several locations in The Netherlands.

From the beginning of the 1990s, the company, since then known as MME Group, made a number of strategic acquisitions. After having acquired the NDT training centre of the Rotterdam Drydock Company in 1989, Materiaal Metingen Europe BV was founded a year later. This division focussed on the development of state of the art corrosion and growth prevention solutions. In 1993, the Destructive Testing Laboratory of the Dutch steel piping supplier Van Leeuwen Buizen was also acquired. In the same year, MME Group opened its anode foundry in the United Kingdom. With these expansions, the company became a major player in material science, testing, inspection and corrosion prevention.

Nowadays, MME Group is still family owned and operates all over the world in in Offshore Oil and Gas, Offshore Wind, Shipping, Civil Engineering, Machine Building and other industries.  It offers a wide range of products and services that help owners, operators and manufacturers realise “A Longer Life” for their assets and products. With more than 250 employees, 7 branch offices in The Netherlands and the UK and a worldwide agent network, MME Group is at your service!

An association is formed with Wilson Walton Ltd., a UK company specialised in corrosion control of ships, offshore structures and industrial installations

Shell Tankers appoints Materiaal Metingen to survey their fleet of vessels. With such references, the company soon becomes a trusted partner for oil majors such as Exxon, Total, Aramco, Chevron and Texaco.

Materiaal Metingen continues to expand its activities, opening the first branch office in Velsen (near Amsterdam). The head office moves to a larger building, in Zwijndrecht.

Our second branch office is opened in Hengelo.

Due to continuous expansion, the company moves from its Zwijndrecht offices to a new built office in Ridderkerk, specifically designed to meet its requirements.

The Heerenveen branch office is opened.

MME Group takes over the laboratories of the Rotterdam Drydock Company (RDM) and piping supplier Van Leeuwen and establishes a multi functional metallurgical laboratory in Ridderkerk. In the same year, the companies' anode foundry is opened in the UK.

The Heerenveen branch moves to a larger office.

The Dintelmond branch office is opened.

The new branch office in Beverwijk is opened. In the same year our branche office in Hengelo moves to a new office.

The Eindhoven branch office is opened, which means MME Group's network for NDT services has nationwide coverage in The Netherlands.

Due to growing demand for our services and the need for quicker delivery times, the capacity of our radiography bunkers and Mechanical Laboratory is increased.

Official opening of newly built NDT Training Center in Dintelmond. Training activities at the Ridderkerk and Hengelo branches are moved to these new facilities.

Just 3 years after opening its doors, the Eindhoven branch has grown from 4 to about 30 employees and therefore moves to a new location. In the same year, MME Group's Rope Access Division is created.

The Heerenveen branch moves to a new office.